Yes, this LEGO Simpsons House is amazing. A lot of us grew up watching the Simpsons or started watching after we became adults, and all the good memories associated live in this house — a house we can play with, with this LEGO 71006 The Simpsons House 2523-piece set! 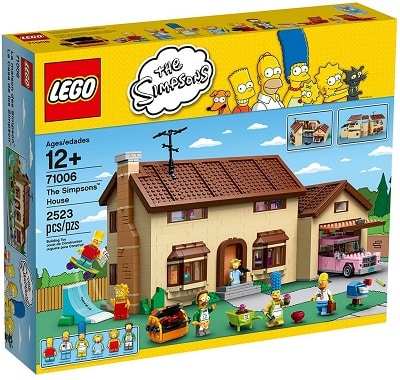 The Simpsons house is iconic to many, and this set is no exception. Released in 2014, this 2523-piece set brings a full Simpsons experience — with mini-figures and details to make any fan proud.

The LEGO Simpsons House set is a long build, but one worth the experience. It’s also playable, so children will enjoy it just as much. The age recommendation is 12+ due to the complexity, but the details make it enjoyable to any age — as long as there’s supervision, of course, as there are many small pieces in this set, such as the crockery and the decorations.

What’s included in the box?

The LEGO Simpsons House has two stories, both accessible by removing the roof. It comes with a fully equipped garage and has a yard.

This set is a long build, but a fun one. While the LEGO Simpsons House isn’t identical to that of the show, the spirit is certainly there and it’s close enough to be a faithful adaptation, even if not exact.

The rooms are well-done, the garden adds to the whole environment, and the garage, too, has a good amount of detail. While some minifigures are missing (the dog, for example), that’s just a matter of preference, as they do not really remove from the enjoyment of the set.

The yard with the treehouse would be a sweet addition as well, but it isn’t such a terrible miss, as well as Lisa’s trademark saxophone. Instead, we get the camera, which is nice in and of itself.

All in all, this LEGO set is an enjoyable experience for the whole family — it’s fun to build, it’s a good toy for the kids, and it just plain looks good. While it has its issues, they’re nowhere near enough to distract a LEGO enthusiast or Simpsons fan from the delightful experience this set brings. It also has a very good value — considering the amount of bricks, the minifigures and the details included, it’s a worthy buy!

So what do you think? Are you a Simpsons fan? Do you have this set, or plan on buying one? Let us know in the comments below!