Analysis of the LEGO Solo: A Star Wars Story Sets

Hey guys! It’s me, VaderFan2187, back again with another post for you all! Today, I’ll be taking a look at, and analysing, the LEGO Solo: A Star Wars Story sets! There are five of them in total (I won’t look at the CCBS sets), and they sit at varied price points. Let’s jump in! 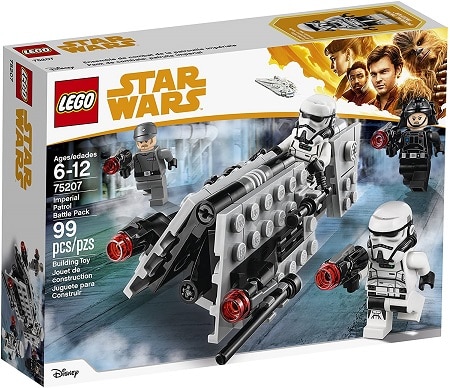 The smallest LEGO Solo set is actually a battle pack. It contains four minifigures, all of them from the Galactic Empire.

Two of the minifigures are identical Imperial troops – Imperial Patrol Troopers. These are from a new trooper class for Solo, and look like a modified armor of a Stormtrooper. Their legs have black detailing like the Hovertank Pilot’s, though it’s a shame the legs are not dual-molded. They have new helmet molds and torso prints, and are armed with stud shooters.

The third minifigure in the set is an Imperial Navy Trooper. This is the first female variant of this trooper in LEGO, and she has a nice new head print. Annoyingly, her weapon is still a stud shooter.

The final minifigure is an Imperial Officer. He wears a grey uniform and has a new head print. His weapon is also a stud shooter.

The build of the set is this speeder bike. It has an interesting angled design which is achieved using Technic pieces. There’s a seat for one trooper at the back and some stud shooter cannons at the front.

The back of the box shows an alternative image of the set, and it shows the engines of the speeder – formed by two translucent light blue bulb elements. It also shows off the play features of the set – stud shooters and stud shooters. 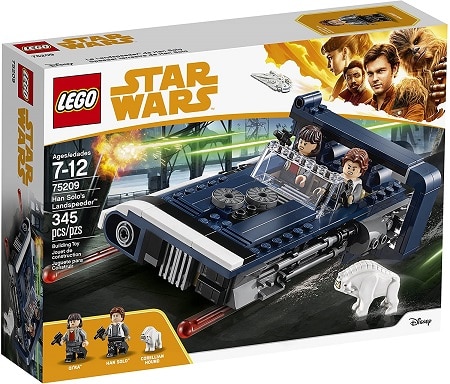 The second-smallest LEGO Solo set of the new wave is Han Solo’s Landspeeder. It represents the blue speeder Han is seen piloting in the trailer. It has 345 pieces..

There are two minifigures included in the set, the first of which is Han himself. This may be a younger version of Han, and he wears a white jacket over a grey shirt and has very dirty pants. His head is the new Han head for Solo, while his hairpiece is the standard Han Solo hairpiece introduced in 2016.

The other minifigure is Qi’Ra, who also appears to be younger. She wears a silver jacket over a dark red shirt, and like Han, she has very dirty pants. Her head and hairpiece are new, though her head is in the largest set too.

The build of the set is Han Solo’s Landspeeder, as seen in the trailer for Solo. It has a windscreen, a flat design, and two seats for Han and Qi’Ra. I think it’s a bit small for the price, what about you?

The back of the box shows that the speeder has some play feature – the front engine can be removed, as can a portion of the rear engine. There are also spring-loaded shooters and wheels for the speeder.

Pursuing Han’s speeder in the trailer was Moloch’s Landspeeder. It has a similar shape but is a lot chunkier and is light grey.

One of the minifigures included in the set is, of course, Moloch. He has a nice new molded head which seems accurate so far, some gunmetal grey robes, along with two weapons – a blaster and a stick.

Another minifigure in the set is Rebolt. He wears a very dirty outfit, has a tan hat, and carries a black whip. He looks like a gangster-style character if you ask me.

The landspeeder itself is mostly light grey with some dark grey and dark tan highlights. It has a very interesting design, with two rounded cuboids.

The back of the box shows the play features. The rollcage can open to put Moloch in the cockpit, a rollcage in the side of the speeder can allow you to release two Corellian Hounds, a disk on the other side of the speeder fires off a rapid stud shooter when turned, and a feeding trough can be taken out from the section in between the engines. 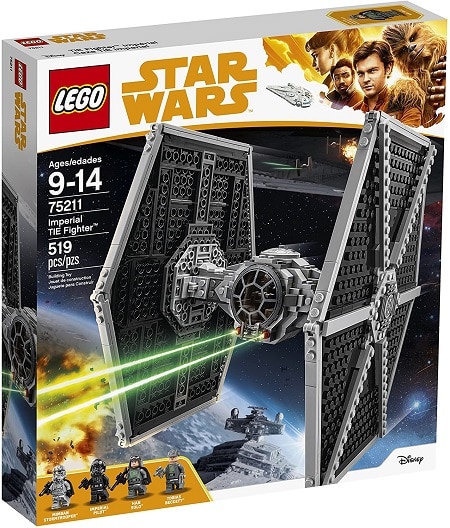 The set comes with four minifigures, the first of which is this Han Solo. This one is a disguised Han Solo, wearing a grey Imperial outfit with some sand green dirt. He has a nice new molded helmet and a poncho.

Next up is Tobias Beckett, Han’s mentor in the movie. This character only appears disguised in LEGO form, but wears a decent Imperial outfit that is also dirty. Maybe one day we’ll get a regular Tobias minifigure.

Last up is this TIE Fighter Pilot. He’s just a normal minifigure and can fly the TIE in the set.

The build of the set is a regular Original Trilogy TIE Fighter. It uses the new 6×6 dish as the cockpit element, and has a neat, accurate look.

The back of the box shows that the model doesn’t really have a lot of play features – only spring-loaded shooters and an opening cockpit. However, flying around a TIE should be lots of fun. 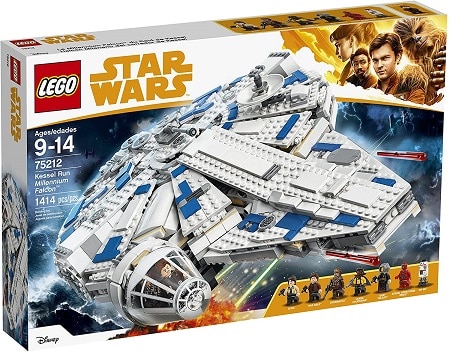 The biggest set of the LEGO Solo wave is 75212 Kessel Run Millennium Falcon, a 1414-piece set.

The first minifigure is Han. This Han minifigure wears the regular outfit that I think Han will wear for most of the film.

Here’s Qi’Ra. She wears a tan jacket and black pants, and interestingly enough, uses a hairpiece from LEGO Friends.

Here we have a new Chewbacca, and if you ask me, I’m not a fan of his new head mold – I think it looks freaky. What do you think?

Here we have an exclusive Lando Calrissian, portrayed by Donald Glover in the film. He wears a yellow shirt and black pants, along with a stylish dark blue cape. He has a double-sided head and a silver blaster.

There’s a Kessel Run Operations Droid, which has a red color scheme and some dirty portions.

There’s also another droid, DD-BD. It has an interesting shape, with an astromech-style body but with two little legs at the bottom.

We also have someone called Quay Tolsite, which looks like he might be a Pyke from the EU.

The build of the set is the Falcon itself. It has a white and blue paintjob, and a different shape due to the closed-up hole in between the front mandibles.

The back of the box shows off the play features – there are spring-loaded shooters, two cannons on the top and bottom, opening cockpit. boarding ramp, gunner positions, detachable escape pod, and full-fledged interior with details like a game table, storage area, and a sleeping bunk.

That’s it for my look at the LEGO Solo: A Star Wars Story sets! I hope you enjoyed reading it! 🙂